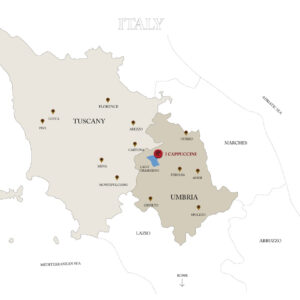 The most striking features of this city are its walls, from which visitors are afforded a fantastic view of the surrounding Tuscan plains. Located at the crossroads between Arezzo-Perugia and Val Tiberina-Siena, the city played an important role in Etruscan times, and maintained its significance during the Roman colonization because its proximity to the Via Cassia established Cortona as a principal means of communication between Etruria and Rome. Cortona has the recent pop cultural distinction of providing the picturesque setting for Under the Tuscan Sun.
Shopping Basket